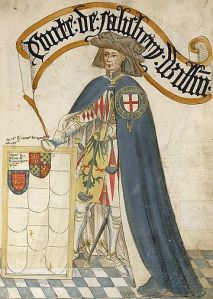 Born on the 28th June, 1328, at Donyatt in Somerset, William Montagu – or Montacute – was the son of William Montagu, 1st Earl of Salisbury and Katherine Grandison (died 1349), 3rd daughter of William Lord Grandison. Young William was the eldest of the couple’s 2 sons and 4 daughters.

William Montagu was a friend and contemporary of Edward, the Black Prince, son and heir of Edward III, who was raised alongside William in the Salisbury household. Also among the young aristocrats in the care of the Earl of Salisbury was Joan of Kent, daughter and heir of Edmund, Earl of Kent.

Before 10th February, 1341, young Montagu and Joan were married; a union arranged by the young couple’s parents and the King, Edward III, seeing as they were both only 12 years old at the time. Although it is possible Montagu and…