I met an author of horror on twitter and have just started reading his novel PUZZLEMAN. So I wanted to post a blog on him and when I finish the book I will post a review. So I introduce Christopher Alan Broadstone to you.

Author Bio: Christopher Alan Broadstone
Christopher Alan Broadstone is the author of the horror novel PUZZLEMAN. A
re-release of the novel and serialization of the book (with updates) is now
available for Kindle and in Trade Paperback. Broadstone’s newest short story,NOTE-TO-SELF, is included in the anthology JOURNALS OF HORROR: FOUND FICTION (edited by Terry M. West).
SUICIDE THE HARDWAY: AND OTHER TALES FROM THE INNERZONE is his latest work — a collection of
short stories, screenplays, and lyrics/poetry. Currently, he is completing his second horror novel, HEATHER’S TREEHOUSE.
Serving as writer and director, he has produced three award-winning short films
to date, SCREAM FOR ME (Best Short Film: NYC Horror Film Festival, Best
Underground Short: B-Independent.com), MY SKIN! (Best Horror Short:
Shriekfest Film Festival [L.A.], Best Film/Director: Cinema Edge Awards), and
HUMAN NO MORE (Best Horror Short: The Indie Gathering Film Festival [OH]).
Also, he has completed two feature length screenplays, COLOR OF FLAME, an
erotic ghost story, and, with actor/writer John Franklin (Isaac from “Children of
the Corn”), RETARD (Best Horror Feature Screenplay: Shriekfest Film Festival
[L.A.]). In toto, C.A. Broadstone’s films have been showcased on several horror
compilation DVDs, have screened at 30 international film festivals, and have won
15 “Best Of” awards. All three films are currently available on Amazon as the
anthology DVD, 3 DEAD GIRLS! 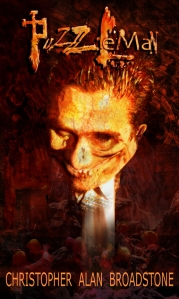 PUZZLEMAN: Short Synopsis:
A young sculptress despondently searching for understanding after the tragic
death of her infant son… A professor of history and a beautiful French vintner,
still longing for the love they shared during World War II… A legless man seeking
retribution and escape from a horror worse than death… A retired detective
itching to get back in the game… Disparate lives, yet each meticulously woven
together over time to play a special part in the Puzzleman’s twisted vision of
eternal life. Into the black Cathedral Fleur du Sang and into the pipes they must
go –– into a terrifying world of grumemonsters, where the inaccuracies of
accepted history and the gruesome future of mankind are laid bare. For Amanda
Zimmerman, Professor John Rainbow, Jeannette Orfevre, the legless man, and
Detective Ben Henfry the Puzzleman is a personal demon awakened into a living
nightmare, and it’s up to them alone to wage their fight for sanity and salvation ––
a fight that swells into a harrowing escape spanning two continents, and the
supernatural perversion of time and dimension. Welcome the pipeworld.Welcome to truth and eternity. Welcome to the world of the Puzzleman
Amazon Author Page: Christopher Alan Broadstone
http://www.amazon.com/Christopher-Alan–
Broadstone/e/B00MZBU2S2/ref=dp_byline_cont_ebooks_1
PUZZLEMAN Available on Amazon:
http://www.amazon.com/Puzzleman-Novel-Christopher-Alan–
Broadstone/dp/1502729695/ref=tmm_pap_swatch_0?_encoding=UTF8&sr=1–
1&qid=1436653206
Official Website for Christopher Alan Broadstone: writing, filmmaking, and
music .
http://www.blackcabproductions.com/
Official Website PUZZLEMAN Page:
Christopher Alan Broadstone – Author
Praise for PUZZLEMAN:
Christopher Alan Broadstone – Author
SUICIDE THE HARD WAY: And Other Tales From The Innerzone
Available On Amazon