Bess Wallace Truman would not tolerate any disregard to her authority.

Bess Wallace (1885-1982) was the granddaughter of a well-to-do flour mill owner from Independence, MO. Her mother, Madge Gates, was a spoiled and self-centered woman, who had insisted on marrying David Wallace over her parents’ objections. Wallace was handsome and affable, but not up to the Gates’ “snuff.” His drinking and lack of financial success did not help. Living with the difficult Madge did not help either.

Bess was eighteen when her father committed suicide. Her mother’s personality became more eccentric, and Bess felt obliged to give up any desire for education or “career” in order to manage the household, help raise her three younger brothers and get them out of the strained situation as soon as possible. 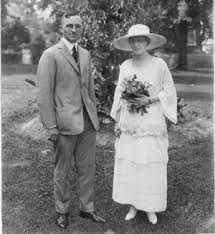 Bess and Harry Truman on their wedding day. Both were in their mid-thirties and…